Who Runs the Internet?

“Suddenly I realize, I am hovering in the phone cloud somewhere. This is me, her, they, you, she, us. Our pictures floating in strange hands, sold in the value of discarded paper, and glass.. traded in locker rooms. I never show my pictures to anybody. But how do I know.. nobody is watching me?”

This is an excerpt from Exposé, a visual poem written by Shuvangi Khadga (one of Body & Data’s independent content creators). This powerful piece has an immaculate flow of poetry along with the background music, which almost feels like one is going through the visual journey, yet it is filled with much helplessness. Shuvangi’s poem depicts the reality that one faces as the receivers and end-users of the internet, sometimes being victims of online violence, some trolled or cyberbullied.

While trolling and cyberbullying may occur conjointly, both are used deliberately for the purpose of causing conflict, hurting, scaring, angering or shaming another user. These are repeated behaviours taking place in digital platforms such as on social media, messaging platforms, gaming platforms and mobile phones.

Trolls might seem harmless and making jokes over a certain topic to get that few seconds of a giggle might be a norm. But that too needs to be understood and carefully taken action upon.

Defamation and publicly harassing someone with a joke over someone’s privacy and identity is not a laughing matter to be swept aside with a few “haha” and “lol”. Trolls are in no way amusing if it mentally distresses a person, especially women or individuals from marginalised communities who are already excluded in offline and online spaces.

The Kathmandu Post article on “Online Violence against Women in Nepal on the Rise”, revealed that out of the 353 cases reported at the cybercrime bureau in the month of August and September 2019, nearly 70 % were online abuse directed towards women. We take an example of a viral photo of a woman with a backless top circulating on social media back in 2020. Without a proper backstory or identification, people started creating memes and started to bully the woman over a dress she wore.

The ones making these trolls live off of people’s misery and mockery and if someone points them on their wrongdoings, they counteract as if it was just a “joke”. But aren’t jokes supposed to be funny?

Social media has made our society less sensitive towards women in public such that public shaming of women in media and in real lives, has become rampant creating hatred and disharmony than kindness and care. On the bright side, this case also gave rise to enormous support to the woman, especially by women activists and advocates, and social media users who spoke against the constant moral policing of women and their clothes in this patriarchal society. Many also showed support by posting pictures of their back with captions highlighting “यो मेरो अमर्यादित ढाड, यसमा मेरै अधिकार।”

Another such case of Nikisha Shrestha, a young teenage tiktoker, can be seen who creates video expressing her sexuality, while lip-syncing and dancing to various songs. She was verbally abused, made fun of with reaction videos and were thrown with mean comments every day on her social media accounts. She is a young teen having fun being herself yet transphobic people on the internet tried to tear her apart. With such degrading memes, no LGBTQ+ people would feel safe to express themselves.

The online harassment she faced online went so bad that she experienced public harassment in person, and that she even claimed to have dark thoughts with irreversible consequences. This shows how harassment/ bullying or any form of violence online can extend and transform to the offline world as well and vice versa. This incident soon led to the #SupportForNikisha campaign trending on Twitter which was a silver-lining on an online platform and showed how the topic of cyberbullying was being brought to the spotlight by Nepalese people.

Unisha Aryal and Manasa Pradhan, Law Students at Kathmandu School of Law too have shined a light on this topic and its severity through their article. The victims of these cyberbullying are, in most cases, young adults and teenagers. Fear of being shamed and shunned plays a big role as to why bullying never really gets reported. Within the period of four years (i.e. 2016 – 2020), 5,574 cases of online harassment were reported to the Cyber Bureau of Nepal, and this is a very minimal representation of the grim reality.

In the last decade, over 90% of the youth from age 12-17 have spent the majority of their time on the internet. Teens and young adults are the main targets for the harassment.  The majority of them do not address it or come forward to report the issue due to fear of being judged. Likewise, the abundant information online being shared or collected on social media may create a bridge for cyberstalking and grooming of minors. Illymation, an Animation Youtuber has created a three-part series telling the story of how she was groomed for over 5 years. She speaks about the whole issue of how dangerous it can be as well as how she fought and escaped grooming.

There has also been a stark rise in situations where young teens and women receive constant messages into their inbox to hold small talks, which is influenced by everyday subtle sexual talks or creepy messages.  “Do not feed the trolls” have been used a lot as a tactic to respond to cyberbullying/harassment but as you ignore these trolls, people always find ways to attack/ hurt the other person with their rude messages. The very idea of “not feeding the trolls” or “not reacting to them” means that rather than addressing the problem, it gives a doorway to silence and put blame on victims and survivors, who are mostly women and individuals from marginalised communities.

Cyberbullying and online violence need to be addressed as it can harm someone mentally, physically and economically while bringing with it signs of anger, depression, self-loathing, which may further even lead to suicidal attempts. One hateful comment can have a huge consequence on someone’s life and when you try to fight back, it can take a very dark turn.  Victim shaming where people nonchalantly comment saying “It’s the victims/survivors own fault” or “Who told them to be so public in a social platform and then talk about privacy?”, is also a major issue.

As trolls and inappropriate memes continue to get normalized, when will we ever see how it psychologically, mentally and physically harms the victims/survivors? How long are we supposed to stay silent and watch it happen? The plea for help goes unheard yet everyone grieves over a lost soul. How long will society continue to be apologetic even after cyber aggression takes away a life?

*If you would like to send us your creation around digital rights (gender, sexuality, tech, society, privacy, autonomy, etc), please send us your ideas to communication@bodyanddata.org 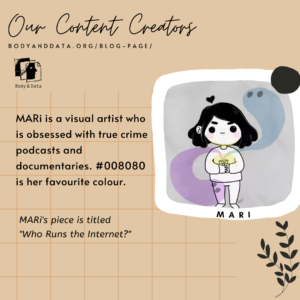