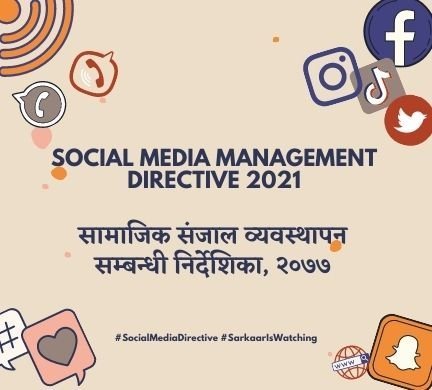 Recently, the Information and Communication Department came up with “Social Media Management Directives” to manage and limit social media on the grounds of morality. This social media directive plays a huge role in shaping how our online space and behavior works and it affects all of us on an individual level. While wearing the mask of “regulating social media companies”, the government actually wants to regulate your content on social media.

By telling social media companies to register through the directive, government is trying to regulate and monitor our content, and the directive orders the companies to comply to governments’ demand to remove the content if it doesn’t fit their ideas of morality and decency. This is censorship. Moreover, if the companies don’t register, they can be banned in the country. In the future, this directive can be taken as a just reason for people to lose social media access when they need the most. These types of compliance to governments’ demand are authoritative and restrictive. The directive limits the ways we can hold authorities and powerful institutions accountable. The directive discourages criticisms and comments, which means that powerful bodies can escape public scrutiny. In addition, those who criticize powerful institutions can be criminalized.

The most used terms in the directive are “social morality”, “appropriate behavior”, “character” which are vague and ambiguous and are used for moral policing us. This specially effects marginalized groups like women and queer folks, whose sexuality and behaviors are more controlled and regulated. Our society looks at anything related to sexuality as something ‘immoral’ or ‘indecent’. The use of such language in the directive could be interpreted and used to curtail and criminalize activities related to our sexuality even when there is pleasure and consent.

In the directive, anonymity is only understood as a criminalized behavior. However, anonymity allows people to express themselves and their opinions without threat (example: queer people, artists, journalists) and criminalization of the anonymity puts these groups into risks of digital as well as physical risk.

The directive asks for evidences before publicly calling people out. Social movements like #MeToo are affected which means that in the future, victims of sexual abuse have more restrictions and hurdles to share their story. Moreover, having evidences doesn’t mean that people can humiliate or harass someone. For example, having a person’s nudes (which can be interpreted an evidence) doesn’t mean one can harass or threaten the person.

Directive discourages critical discourse and engagement (even likes, shares, comments, reposts!). Through surveillance of our online space, the government want to silence the voices against them by criminalizing act of resistance against authorities. In a broader sense, these types of surveillance and controls are shaping human behavior and attitude to make us, citizens docile and law abiding by discouragement of critical discourse and agency over our opinions.