The evolution of the internet and advanced technology has unfolded a pathway to revolutionize traditional media into new media. The emerging form of new media storytelling is mobile journalism. One doesn’t necessarily have to be with an educational background in journalism. Anyone with a smartphone or portable electronic devices with network connectivity can gather and disseminate information. This method has fostered the convention of citizen journalism. The traces of citizen journalism can be discerned in the programs of community radios in Nepal where people would report the issues of their community. The ubiquity of smartphones and access to the internet made this practice of journalism a popular trend by the early or mid-2000s. These days any ordinary individual disseminating information using the internet and technology to the consumers of journalism can be considered as citizen journalists. “When the people formerly known as the audience employ the press tools, they have in their possession to inform one another, that’s citizen journalism.” states Jay Rosen who’s a professor of Journalism at New York University. Nevertheless, it is an idea originated to embolden individuals to scrutinize the events around their surroundings which strike a larger interest of the society. On account of rising digital media, it seems that the future of journalism is citizen journalism. In the contemporary context, one cannot deny the rise of citizen journalism when digital democratization is booming. Here, digital democratization refers to democratization of technology which alludes that access to technology rapidly continues becoming accessible to more people. Thomas Friedman an author of the book ‘The Lexus and the Olive Tree: Understanding Globalization’ argued that the era of globalization has been characterized by democratization of technology, finance and information.

Why is citizen journalism important?

Digital platforms provide users freedom of expression to disseminate their information. The information processing approach by the individuals is a bottom-up approach. At the same time, when these platforms are used by mainstream media corporations the information processing approach is a top-down approach. In short, information dissemination is getting decentralized due to citizen journalism which is one of its significances. We can see how important citizen journalism is in the context of Southeast Asia where it was helped to alert the state and communities during the times of natural calamities. In Nepal, a social activist Amrita Lamsal observed and updated on Facebook the pictures of crooked roads during her commute. This brought attention to government authority.

Yet, at the time of practicing citizen journalism in Nepal, the internet has been misused various times. Most of the Nepali YouTube and Facebook contents are focused on clickbait contents, spreads mis-information and disinformation that capitalizes on shock value for their personal gain.  Based on my observation, I would like to share a fine example of my mother. She uses Facebook, YouTube and TikTok frequently to consume news and other information. I often find her watching videos on Facebook and YouTube that are sometimes annoying and concerning to me. She shed tears watching some videos. During the initial phase of Covid-19 pandemic, I realized she had been a victim of misinformation about preventive measures of the virus which were not credible. At such times of intense anxiety and uncertainty misinformation and disinformation spreads quickly. The spirit of citizen journalism is misinterpreted due to such contents and leads to several repercussions. I would like readers to acknowledge the power of mass media content in forming diverse opinions in our communities. Citizen journalism takes a hypodermic needle approach to mass communication. The approach simply states that the information delivered through the mass media persuades all people powerfully without people having any control over the way they react. Such impact of citizen journalism overshadows its benefits. 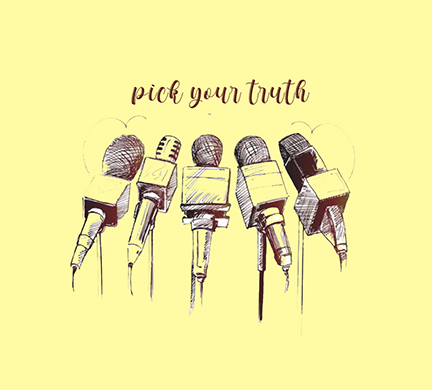 Is citizen journalism taking place in the right order especially in a democratic country like ours?

According to the Himalayan Times, digital literacy among Nepali citizens is only 31% which indicates the lack of filtering and fact checking information in significant numbers. The accurate information is consumed by only a small number of people. This creates an information bubble but how? Well, algorithmically driven media contents induce audience fragmentation. Audience fragmentation expedites the formation of an information bubble. The bubble then accelerates in persuasion to consume fake news and disinformation in the least digital literate group and sometimes, takes forms of political and/or religious extremism. In Nepali mainstream media, we cannot find any particular space segregated for citizen journalism unlike other international media. Handiness to the internet and technology brought mis-representation in the concept of citizen journalism.

YouTubers practicing video journalism for the sake of gaining popularity by invading someone’s right to privacy is completely unethical. On one hand, YouTubers are creating content by clickbait either for earning views or for money and on the other hand, people have freedom of expression to use these platforms and disseminate information. The overarching theme of free speech and disinformation is quite debatable.

Additionally, this grey line has been capitalized off by the state and authorities worldwide – where in the pretense of countering misinformation online, people’s freedom of speech is hampered, creating more opportunities for the state to surveil and monitor the citizens. Through various bills and directives brought forth by the government of Nepal, their intentions were clear on content regulation and censorship online. Furthermore, social media and digital platforms are striving towards more content moderation to tackle disinformation online, but are affecting women, queer folks and other marginalized communities who want to explore themselves sexually or create sexual content online. This phenomenon shows how the psyche of citizen journalism is misconstrued and is a slippery slope which has massive consequences.

On the other hand, citizen Journalism has become an integral part of our society in giving voice to the voiceless. Historically, there has been an imbalance of power between media organizations and individuals. Why do we consider information of big media organizations credible and that of an individual not credible? Democratization of content creation because of the internet has allowed a space for more stories and narratives to come forward – whether these are TikTok videos from indigenous communities showcasing their traditions, or activists using Twitter to spread digital safety measures during Hongkong protests or a small YouTube channel of a housewife in Nepal cooking her favorite dishes. The diverse content around the corners of the internet showcases the diverse lives of people that have been previously shut down by the social structures around us.

However, the power of freedom of expression and creating content online that citizen journalism provides shouldn’t be misused. For instance, you saw an accident on the road, suddenly you took pictures and posted them on your social handle. Now is this reporting considered as citizen journalism? Absolutely, it is considered as citizen journalism. In the same case, journalism does not allow you to take vulnerable pictures of the victims in the spot of the accident. One should not film or photograph when an individual is in private grief. Additionally, one should not manipulate films and pictures in a way that changes the entire case. On one hand, such practices of citizen journalism are detrimental to ethics of journalism, and on the other hand, the consequences of misinformation and disinformation spread online could potentially risk people’s right to information, freedom to create and be themselves online and freedom from censorship and surveillance. If not careful and sensitive, the pitfalls of citizen journalism overshadow its benefit. It is important to inquire the credibility of the information we consume online as well as being more mindful of the content we produce online. 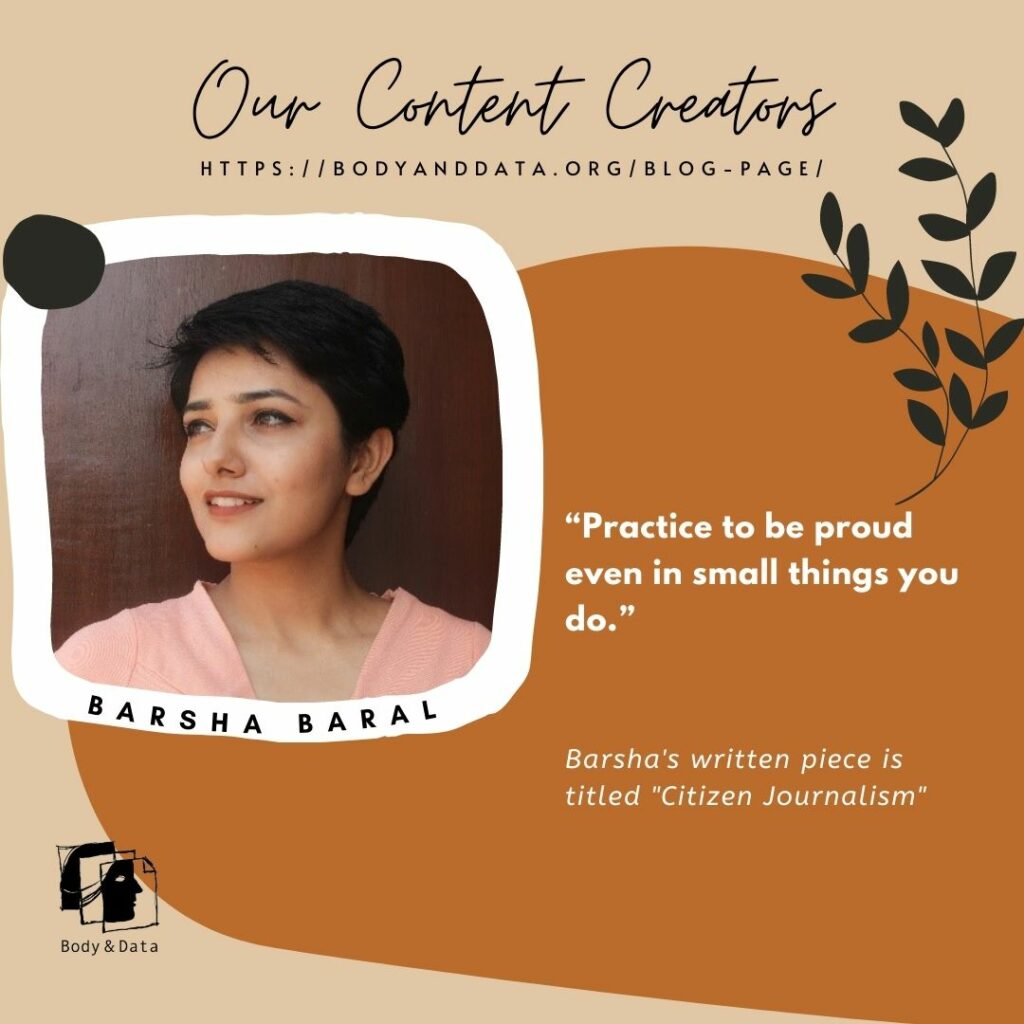